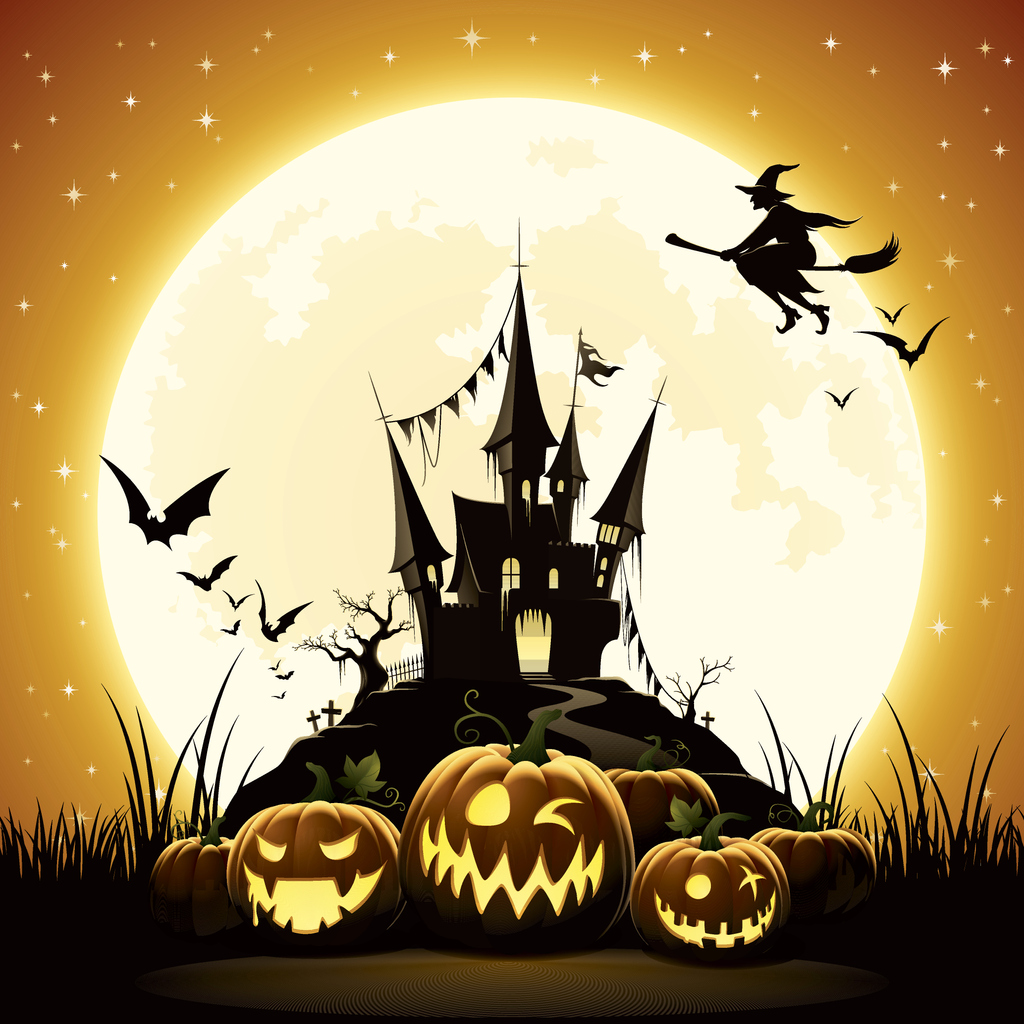 Did you know that Halloween has roots going back almost more than 2000 years? Yes, it isn’t some holiday conjured up by Hallmark or created by mega-corporations (we’re looking at you, Easter Bunny and Santa).

Now, although there’s been a corporate feel about it, you’ll be shocked to know that it has an ancient heritage going back to the Celtic Era. If you’re curious to know how we go to this point, this in-depth timeline should give you the answers you seek.

Your Timeline To The History of Halloween

More than 2000 Years Ago: The Celts celebrate Samhain, the end of the harvest season and the start of winter.

They believed that winter was a time for death, so it was a celebration for those that departed. Family members would have feasts and “invite” dead people to commune with them. You see the traces of Halloween horror already starting to assemble.

50 to 100 AD: The great Roman Empire conquers the Celtic lands and incorporates Feralia – their modern-day version of Samhain – as part of their everyday tradition. It spreads throughout the empire.

100 to 400 AD: The Dark Ages are a proper name for what occurs during this period. It’s also the same time that many modern-day Halloween traditions start to emerge, particularly the rise of witchcraft and witches.

These “witches” celebrated a “Witches’ Sabbath” (also known as Black Sabbath – you see where Ozzy and the gang got the name of their band) each year, which happened to fall on October 31st (coincidence?). Much of our Halloween folklore stems directly from this High Witches’ Sabbath celebrated in Europe during the Dark Ages.

This was also when Pope Boniface IV dedicated the Pantheon (a momentum built to the goddess Cybele, to whom the Romans pray and honour the dead) and expanded the celebration to include All Saints Day (also known as Allhallow-even). It becomes a part of Roman tradition, and therefore Christian and Catholic beliefs.

These two will meet in a face-off!

The 800s: Not really. It was more of incorporation than anything else.

In a bid to convert pagans to Christian beliefs, the Church added All Saints Day to the celebrations October 31-November 1st.

This change continues to expand dates, as in the 1000s, November 2nd is included in the All Saints Day celebrations, which is aptly titled All Souls Days.

But its most significant change is that Christians would dress up in angel, devil, and saint costumes. And so begins the next great Halloween tradition: costumes! 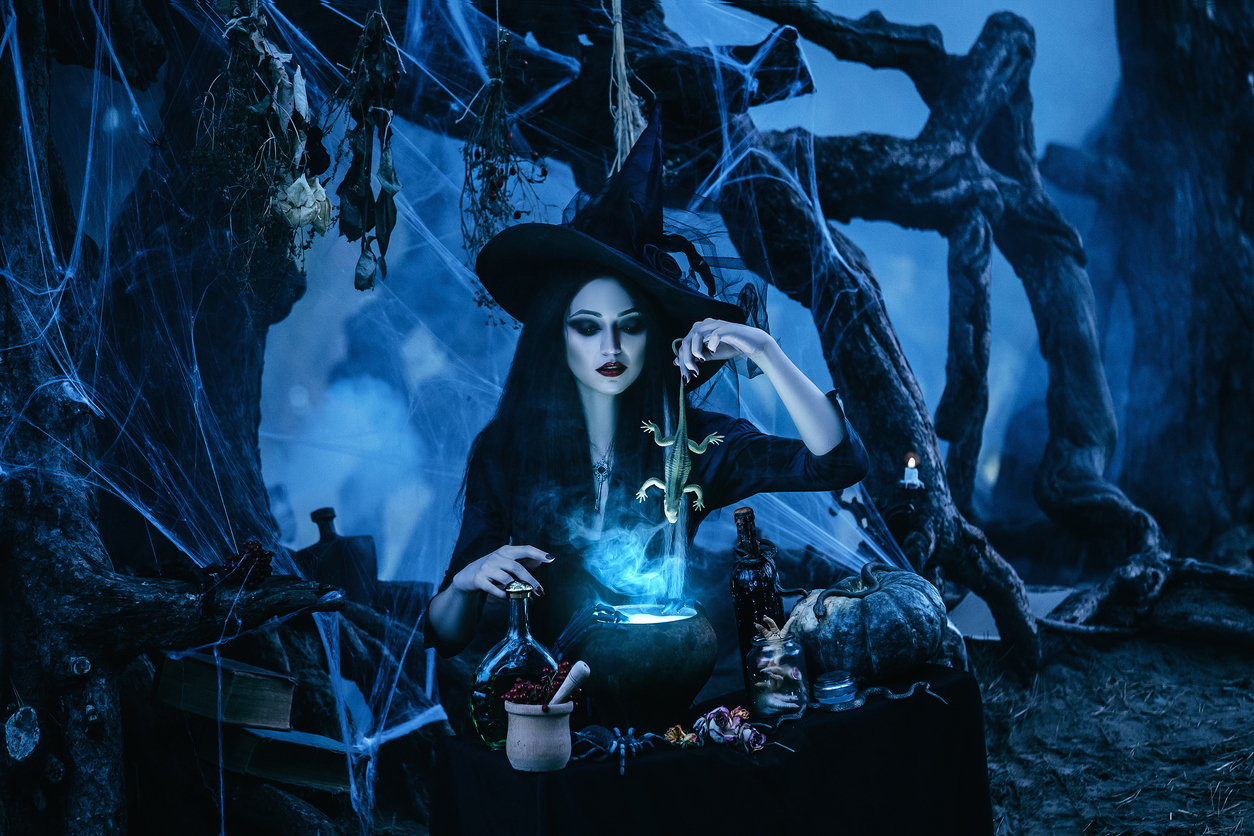 fashionable toning,creative computer colors,On the eve of Hello ween witch to conjure and decided to cook a potion in the tank, standing near the mystical lake.

The 1550s: The three-day celebration (Oct 31-Nov 2) is known as Allhallowtide becomes widespread amongst the Christian community. But more pointed is that trick or treat started here.

With Halloween costumes (usually just black robes and clothes), Christians would mourn the dead and go door to door asking for food for the dead. If you weren’t given any, you would “trick” the household (a form of prank).

So the origin of trick or treating started here. But it was far more horrific than expected.

The 1600s: Here is when things started to get messy, and sadly, quite bloody.

As the New Age began, the Puritans – those fanatical about the Bible – set sail to the new world. During this period, they stopped such practices from occurring, as it was deemed “witchcraft” and, therefore, forbidden by God as an abomination. So they ban the Allhallowtide celebrations, considering it a Catholic holiday. People who did celebrate it were dealt with…violently.

That didn’t stop the Catholics in Europe from celebrating it, though. They went full-steam ahead with the celebrations, carving up turnips (later, turning them into pumpkins) and asking for sweet treats instead of food.

The 1800s: When the Potato Famine in Ireland started up, it left many Irish Catholics needing a new place to live, which turned out to be America. So when they came, they brought their various holidays and traditions, particularly Samhain, Allhallowtide, which by then was named Halloween.

Over the next hundred years, it slowly became a staple in the major holiday calendar. It took its roots in America and became widely accepted throughout the country.

It was until the 1900s that it became a full-blown tradition, widely marketed and celebrated.

And that’s how we got the Halloween we celebrate today.