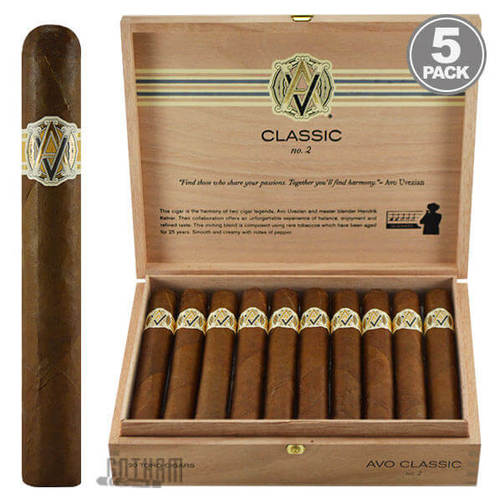 The Avo cigars are the combined creation of well-known Jazz musician Avo Uvezian and tobacco expert Hendrik Kelner. The first ever cigar was released in 1988 and soon became an internationally acclaimed item. It sold 100,000 cigars just within the first year. The cigars successfully evolved into more collections among which, the Avo Classic was the first. Today the brand is owned by Davidoff but the excellence associated with these cigars continues so they are still well-loved; counting among the top 25 cigars of the world.

Background of the Avo Cigars

The Avo cigars came into being when Uvezian and Kelner met in Puerto Rico. Uvezian fell in love with the cigars; hence, the two combined their creativity and craftsmanship to create these renowned cigars.

The cigars have been greatly inspired by the personality of Uvezian. He was not just an acclaimed jazz musician but had a deep love for life and travel. These qualities have been embodied within the Avo cigars, which bring forth the combination of rich flavors and cultures.

These cigars are handmade in the Dominican Republic using the best tobacco and hand rollers. Each cigar is then inspected carefully so only the quality-assured are sent out into the market.

The Classic collection was the first brand to be launched under the name of Avo cigars. These are the cigars that were released in 1988 and the precedents to the many that will come after ad win the hearts of many around the world.

The Avo Classic collection is made from filler that contains a blend of 5 different tobaccos from the Dominican Republic. The filler is a long-leaf one that includes the tobaccos known a San Vincente and Cuban-seed Piloto. The binder of the cigar is made from the Dominican Olor tobacco. The filler is finely aged and then, along with the binder tobacco, is wrapped within a silky and golden Connecticut-seed Ecuadorian sun-grown wrapper.

Taste of the Avo Classic Cigars

When it comes to the strength of the cigars, the Avo Classic is mild. The smoke produced is of the creamy variety and scents such as earth, hay, and nuts are prominent. The burn line of the cigars is thin and these will burn slowly and steadily.

The Avo Classic cigar’s aesthetic is enhanced by the silky wrapper and this is why many cigar lovers take their time smoking it; savoring it.

The Avo Classic cigars were the first creation of Uvezian and Kelner. Therefore, these can be considered as the forbearer of the craftsmanship of these two men. The same true essence has been maintained carefully, hence, it continues successfully to this day.

These cigars can be bought in different shapes and sizes. The different packaging can be selected according to one’s needs. The Classic Avo cigars are available as singles, singles packed in tubes, boxes of singles, and boxes of tubes. The tubes are made from aluminum so as to seal the freshness.